“Outing the Elephant” One Conversation at a Time

Over the past several years, every organization that I have been invited to coach in, struggles with the same issue. They do not have the skills they need to have those conversations they need to be having – with their direct reports, bosses and their colleagues. There tends to always be an “elephant” lurking in the room; you know, that unspoken tension that no one wants to talk about. That elephant is so big and so obvious, so I ask you:

What would it take to “out” that elephant?

Recently, one of my clients, members of an executive team in a manufacturing company, said that they often felt “excluded” from conversations and meetings going on around them.  This led to feelings of anxiety and uncertainty.  They never understood why they were left out, and with no information forthcoming they were left to their own devices in making sense out of the perceived exclusion.  Because feeling excluded made them insecure, they had a hard time bringing this or any other issue forward either in the group or to the president.  It just felt too dangerous to rock the boat.  Trust was missing!

According to Judith Glaser, author of Conversational Intelligence (C-IQ), trust is the key component, the magic ingredient that makes it possible for individuals and teams to have healthy conversations and co-create together. 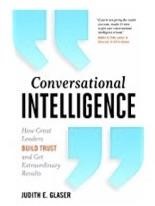 Why is this so?

But the solution to this team’s issue although simple, requires trust.

The latest research by Angelika Dimoka (2010), using Functional MRI’s, shows that trust and distrust activate different areas in the brain and have different effects, and it’s pretty challenging to be in both of these parts of the brain at one time. As well, recent research reveals that Oxytocin, the bonding hormone is released when trust is present making trust feel good.

But, when we feel threatened our brain is showered with Cortisol, the stress hormone.
And to put that simply – distrust does not feel good.

So, in order to bring the issue and other issues forward, this team and its members needed more safety and trust – the first step to having healthy conversations. You see, it seems that the bottom line differentiator of those who are successful (from those who are not successful) in their relationships is their ability to have healthy conversations. By building trust we are setting up our relationships, and the conversations we have in them, to be healthy.

So here are 5 ways to build Trust:

Transparency – when we are transparent and clear uncertaintly (fear) is reduced
Relationship – build the relationship before tackling tasks, it builds trust!
Understanding – we need to “stand under” each other’s reality – it’s not just about content
Shared Success – acknowledging and celebrating successes builds trust
Truth Telling – no more elephants here!

Using the Conversational Intelligence Framework has been hugely successful for my clients. They are thrilled with their new ability to turn difficult conversations, that they typically would have avoided, into healthy productive ones.  They name those elephants with ease and as a result individual and team accountability and trust is increasing incrementally, one conversation at a time.

So let’s connect to discuss your organization’s needs, one conversation at a time.